Top Aces provides in-situ air combat training to national air forces around the world. Their growing team of 270+ highly skilled personnel is distributed throughout the geographies where they serve their clients, and includes more than 40 fighter pilots, of which 80% are Top Gun Fighter Weapons School graduates. The quality of the services they provide depends on the highest possible technical and operational airworthiness standards. 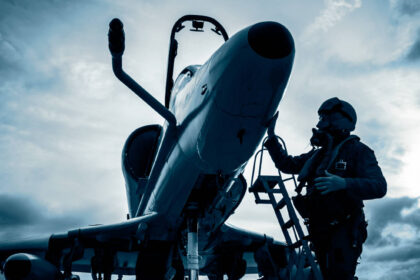 CONSOLIDATE AND MIGRATE TO TRANSFORM
When Yves Rousseau joined Top Aces in September 2019, his goal was clear: digitally transform the company to position it for the future. This meant streamlining the company’s IT, making it 100% Microsoft for back-office processes, and modernizing the way employees access and share documents, especially those vital to the safety of their customer-facing operations.

It seemed like a simple task of attaching SharePoint, which was already in use, to Active Directory, and he was confident it would take a couple of weeks. He would then begin the work of simplifying and rationalizing, then provide user-friendly, collaborative, secure workspaces and hubs.

What Yves did not know was that Top Aces, founded in 2005, had been acquired by another company early in its history, and had migrated much of its IT under the name of Discovery Air (DADS). In 2007, a strategic business decision was made to rename DADS as Top Aces, but the changes that followed were largely cosmetic. While employees sent emails from @topaces.com, beneath the surface lurked @discoveryair.com.

When Yves came on board, the company was running two SharePoint environments. They had a 2010 on-premises version where they stored the core documentation needed for servicing their aircraft and flying their missions — some 45,000 documents. Additionally, they were using a 2016 Azure cloud version for their day-to-day operations. One of the first tasks he gave his team was to begin moving the documents from the legacy SharePoint server to the online version. But with the Discovery Air domain passing itself off as Top Aces, the situation soon became confusing, and the IT team no longer knew how to transfer the documentation to the targeted schema. Operations continued to run smoothly, but no improvements or modifications were possible.

“The system was a spaghetti of tricks behind the scenes to make it behave like Top Aces, but it was really Discovery Air,” Yves explained. “The SharePoint issue was the symptom of this bigger problem behind the scenes.”

The company needed to consolidate the two domains, merge them into one cohesive intranet, and then migrate to the cloud in a Top Aces tenant, before it could start the transformation of leveraging Microsoft 365 and SharePoint together.

ITERGY’S SOLUTION: A HAND-IN-HAND PARTNERSHIP THAT HELPS THE ENTIRE COMPANY UNDERSTAND THE ISSUES AND STAKES TO ENSURE A SMOOTH TRANSITION AND ADOPTION
Yves had already worked with Itergy on three previous occasions (since 2004) in the automotive and telecommunications industries, each time following mergers at the companies that employed him. It was obvious to him that Itergy had the team he needed.

“Magic only happens with the right partners in place and, as an IT team, we need to enroll partners as an extension of us,” he pointed out. “When we contract an outside partner, it means we’re in trouble in some way, and we need to align our vision together to make sure it will be delivered.”

SIMULTANEOUS USE OF DOMAINS DURING STAGED MIGRATION
The first step was to consolidate the two company environments into one, which was not as simple as it seemed, because Top Aces needed to continue to use the same domain, that of Discovery Air. It is not possible, however, to rename a domain in Office 365; a new tenant must be created.

“Usually, there’s a cutover migration from one to the other, from one day to the next,” explained Alain Perenyi, Senior Consultant, Project Services at Itergy. “If it goes wrong, there’s no email and a lot less work getting done.”

Itergy offered a staged migration — testing, piloting, migrating in batches — while allowing the customer to use both the Top Aces domain and the Discovery Air domain simultaneously. In addition to minimizing impact on users, this scenario maintained the security of their systems.

“Few companies enable a client to use two domains at a time,” specifies Alain. “Our experts make it so users can both receive and send with the old name, even on the new tenant. Microsoft, for example, only allows you to receive.”

ITERGY DOES SHAREPOINT WITH YOU, NOT TO YOU
More complicated still was the SharePoint migration. At one point, Top Aces had considered just starting from scratch. However, as Yves explains, “[with] 45,000 documents, everything linked together, and two environments on top of each other, it was impossible.”

Itergy began by understanding what the current situation was, identifying the risks, and assessing what content was not migratable. An in-depth inventory was carried out first, providing key information on the age of documents and the last access date to the document management team and the core project team. Obsolete and redundant documents were pinpointed, along with old workflows, enabling the Top Aces people to make decisions on whether to migrate them.

This allowed Itergy to make a proposal that clearly set expectations for the migration and consolidation, ensuring flawless execution. Since this first phase aimed to set the stage for the desired digital transformation, no reconstruction or modification of the existing intranet was carried out. Documents were simply moved to SharePoint Online with the Classic interface, albeit restructured so they could be easily found.

Top Aces continued to use their SharePoint environments live throughout the migration, which meant the transfer had to be done in the background, then cut over. To smooth the transition for users, Itergy’s SharePoint team worked with Top Aces’ core project team, advising them on how to communicate to better manage the changes. As Mike Hellinga, Itergy’s Vice-President of Productivity Solutions, likes to say, “We don’t do SharePoint to you, we do it with you”.

BENEFITS: SET FOR THE FUTURE WITH NO INCREASE IN BUDGET
By September 2020, all users had been migrated to the new Top Aces domain, the entire IT environment was cleaner, and users felt it was more stable. There are no more lost documents, no more duplicates, and no more version control issues.

BETTER ACCESS MANAGEMENT AND REDUCED COSTS
The company has increased access security with multi-factor authentication (MFA) and improved the user experience with single sign-on (SSO) for its HR and ERP systems. Both these features had proven impossible to implement previously because of the superposed environments.

Additionally, Top Aces has reduced IT costs by eliminating the license for the Discovery Air tenant, even through the transition period, thanks to Itergy interceding with Microsoft on their behalf.

“My purpose is to maximize each dollar of IT spend,” said Yves. “And that’s why we need to streamline. Using multiple separate communication and collaboration tools is out. Microsoft Teams is in. Duplicating documents to create need-to-know content collections is out. A single version of the truth with personalized access according to needs is in. Desktop is not out, but mobile access is definitely in.”

TRANSFORMING THE WAY TOP ACES WORKS
Top Aces was now set to embark on its actual digital transformation: the redesign of its intranet to leverage the latest tools and features of Microsoft’s modern interface. It will change the way Top Aces employees work, how they store information, and how they access it.

Work has already begun, with Itergy using its JumpStart methodology to understand the company’s drivers, objectives, and identified challenges. By dialoguing with the 19 business units, they have created a shared vision of what Top Aces wants to gain from this renewal project and can now use the capabilities of the technology to solve those business problems.

For example, documents had been duplicated and organized into collections for particular audiences, allowing them to see only what was relevant to them. With SharePoint used to its full extent, leveraging its database capabilities, customized views can be created that bring together only relevant documents. Itergy’s team will now go back and reorganize the structure of the documents, clarify ownership, and use metadata to enable easy retrieval and relevant viewing.

When the transformation is complete, a corporate-facing SharePoint site will ensure everyone is kept up to date with the latest published developments from those departments that matter to them. Each department will then have its own internal workspace for in-progress documents. Additionally, Teams workspaces can be created for projects, replacing the sub-sites that exist today. Once the project is over, participants will no longer have access to outdated documents, thereby improving both information security and operational safety, including the safety of the pilots — the Top Aces.